“The ancients told us that long, long ago, in the Huichol mountains the Grandfathers came together in order to discuss a situation. The people were ill, they had neither water nor food nor rain, and the earth was dry. They decided then to send out four youths of the hunt, with the task of finding food and bringing it to the community to share it, no matter how much or how little they hunted. Each one of the youths represented the elements: fire, water, air and earth.

The following morning the youths began their hunt, each one carrying their bow and arrows. They walked for days until, one afternoon, there jumped from behind a bush, a grand and fat deer. The youths were exhausted and hungry but when they saw the deer, they forgot everything and began to run after it, and did not lose sight of it. The deer looked at the youths and felt compassion for them. He let them rest a night and the next day he enticed them to continue their chase. 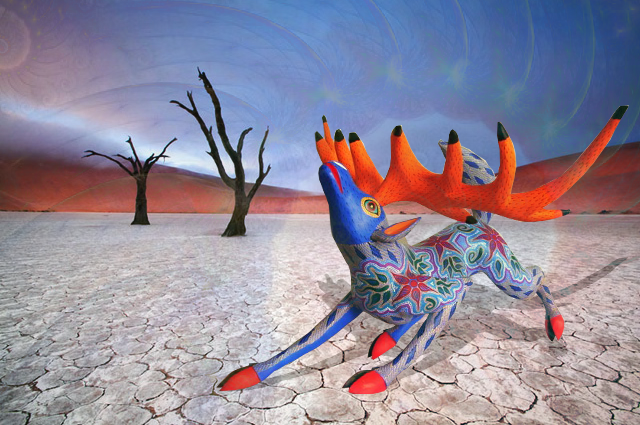 Many weeks passed before they arrived to Wirikuta (a desert in San Luis, sacred path of the Huicholes.) And the youths found themselves on the road to a hill, near mount Narices, and they saw the deer jump in the direction of the place where the Spirit of the Earth dwelt. They swore they had seen the deer run in this direction and they tried to find it without success. Suddenly one of the youths shot their arrow and it found its mark inside the silhouette of the deer. But when they approached they found the figure of the deer was formed from peyote cactus that were found in those lands and that shone brightly in the sun like emeralds looking in only one direction.

The youths were confused by what had happened, but decided to cut the plants forming the figure of Marratutuyari (deer) in order to take them to the people. After walking for many days they arrived at Huichol Mountain, where everyone was waiting for them. They went straight to the Ancients and told them their experience. The Ancients began to distribute the peyote among the people and after a time, no one felt hungry or thirsty.

Ever since, the Huichol revere peyote that is at once Deer and Corn, their Spirit Guide. Therefore, each year since then, they make a pilgrimage, maintaining the route alive from the Huichol mountains to Wirikuta, in order to ask God for rain, food, and health for the people. ”